Are the Ten Commandments relevant today? Many are arguing that they are not. They argue that Jesus, the Word made flesh, is the replacement for the words written in stone. The new covenant replaced the old, making the old of no relevance in our lives today. The problem is we have siloed the law into the narrow package of individual salvation and righteousness. Since the law does not make us righteous, we think the law is of no consequence. 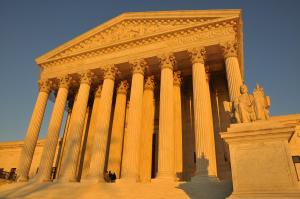 It’s no coincidence that the Confederate Flag has come under attack only days before the historic LGBT ruling. The Confederate Flag is the emblem of State’s Rights. Yes, State’s Rights to own slaves, but we cannot ignore the States Rights issue any more than we can ignore the slavery issue. As a reader of American antiquarian books written by the Founding generation, I understand and have high regard for the proper balance of sovereignty of the States and the Federal Government. When the balance of power shifts to favor one at the detriment of the other we have a recipe for disaster.

While the celebrations, lamentations, and debates swirl around the recent Supreme Court decision, State’s Rights and consecutively citizen’s rights hang in the balance.

Why do I link the attack on the Confederate Flag to the LGBT movement?

I believe it is a prophetic sign to the real travesty at hand. It is a strategy of war for a combatant to remove the symbols of

rebellion, promise, or liberty. We saw this when Rome sacked Jerusalem and destroyed the Temple. We see this when ISIS destroys the historical artifacts in the cities they conquer. We saw this on 9/11 when Al Qaeda attacked the Twin Towers and the Pentagon.

I do not profess to know that the attack on the Confederate Flag is, in any way, part of the game plan of the LGBT activists, only that it is a sign worth paying attention to. I do not believe that it is naturally connected. Honestly, I think the LGBT movement is END_OF_DOCUMENT_TOKEN_TO_BE_REPLACED

My Tweets
Scroll to Top