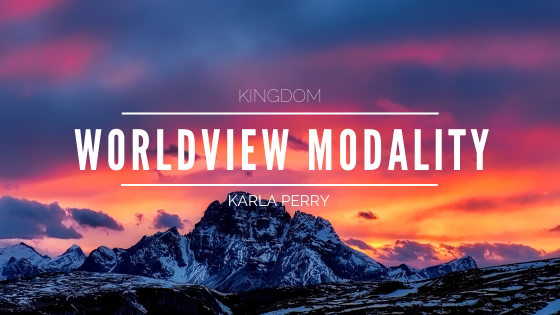 Worldviews are complex edifices that we use to acquire, filter, and disseminate knowledge. They run deeper than the content we consume and the ideas we hold true. They also drive the mood with which we emanate knowledge. Sometimes this looks like an attitude from which we share our knowledge. It is also a way in which we hear information or categorize the people around us. Our worldview mood can be healthy or unhealthy. It can carry love, hope, and good will, or it can take that same information and be destructive, critical, and forceful. At lot depends on how much we have cultivated and matured our worldview modality.

The Christian worldview is more than what we think, but also the way we think. We can be biblical in knowledge and still not be like Jesus in mature wisdom and compassion. We can pass the knowledge test and fail the mood test. Often, I agree with someone in content and yet disagree in perspective on that content. There are ways of thinking that we have fallen into as Christians, especially my fellow Christian conservatives, that betray a mood that undermines our desire to see true discipleship that builds nations. One major crippling persona we take on is that of the victim.

Modern Christianity is plagued with the mood of the victim. Someone somewhere is doing something to us. “They” are preventing us from liberty, mission, life, good education, good marriages, good family values, good movies, good television, (fill in the blank). “They” may be unbelievers, people of a different political persuasion, the government, foreign governments, the United Nations, or maybe we have boiled it all down to “the enemy.”

No matter who “they” are – “they” are the most powerful and successful force of control and ill will the world has ever known. So powerful, we are completely inhibited from being Christians in the freedom and liberties that are our God-given rights. Nero did not even have this power as the church grew exponentially during his reign despite his tendency to burn Christians alive to light up the acres behind his grand home. But no matter, we live in unprecedented times of oppression of Christians . . . or so says our victim mentality.

What is inhibiting our success to disciple our nation?

Not the nebulous “they.”

G.K. Chesterton once wrote the shortest editorial in history in answer the question “What is wrong with the world?” He simply wrote, “I am.” Chesterton was no victim. He placed the problem squarely where he could do something about it – on himself. The problem is not the “other” it is the sin in our own hearts. It is the errors in our own way of thinking. It is our own mentality that binds our hands and prevents success.

We spend our time fighting “them” when “they” have neither handcuffed us nor do they hold the key to our freedom. We fight culture instead of discipling it because our own thinking has caused our disempowerment. We blame the darkness when God did not place the keys of the Kingdom into the darkness but gave them to His sons and daughters. We are the ones not unlocking the Kingdom and releasing it into the earth. There is nothing darkness can do to prevail against it.

It is not about fighting harder. It is not about standing up against “them.” It is about loving the truth and living it out in tangible disciple making ways. This is what it looks like to love God and love people. The Father did not send Jesus to fight people, but to die for them.

In the same way, we are called to lay down our lives for our neighbors. We do this in the context of nations for if we did it only in the context of individual salvations, we would lay our lives down only to save souls and not to save marriages, minds, economies, agriculture, etc. Any area of culture that we do not disciple, disciples us.

What motivates the world?

Victims ascribe the motives to their so-called oppressors.

“They did this because . . .”  again, and again we assign motives to the other – the other we do not know. The other we have not befriended. But we know them better than we know our own motives.

How often do we take stock of our own heart and motives? How often do we do something knowing precisely why we did it? How often have we lost our cool and not mean to cause the effects we caused? What if someone was watching and saying, “Well that guy just hates his kid – look at how he talked to his child? He does not want his child to succeed in life or else he would never have said that.” If we heard people’s incorrect thoughts about us, maybe we would know motives are not always so clear. We want, instead, to do unto others as we desire be done to us. To do this “the other” needs to not be “they” – the “other” must be personal – consider our responsibility to love our neighbor as ourselves and place that person into the role of “neighbor.” Perhaps, Nancy Pelosi. . .

Our outlook – our worldview – informs our thoughts about motives. We can certainly judge ideas and look at their logical conclusions – but we cannot conclude the person desires for those conclusions to be the outcome of their ideas. They are likely blind to the outcome – just as we are when we speak forth bad ideas because we have not been discipled in good ones.

People were not raised the same. People come from different life experiences that shaped their worldview. They are not trying to hurt people on purpose with their ideas. They are simply doing what they believe is right and “they” are just as convinced as “we” are of that rightness. Love does not make truth relative – it does not remove the standard. Jesus loved us while we were yet sinners.

No one knows when they are believing a lie.

Who has false ideas that if lived out to their logical conclusion could hurt a person or a nation?

The time for pointing fingers never existed. We do not blame. We disciple. We start from where we are, not from where we wish we were. We can never arrive wishing we were on a different trajectory of maturity. We move forward from here.

Even though it is mine, ours, and the modern Body of Christ that has not had the thinking necessary to disciple the way we should today – we also do not cast blame on ourselves. There is a difference between owning responsibility and blaming. Blame is not Christian. It leaves yourself or others immobilized in guilt. When we do this, we bind ourselves as victims of our own error, we leave ourselves resting in blame. There are many reasons we have arrived where we are. The blood and grace of the Lord covers all of those as there is now no condemnation for those who are in Christ Jesus.

Thus, we do not condemn the world – they are condemned already – and we do not condemn the church for there is no condemnation in Christ – nor do we use quotes, air or otherwise, to separate ourselves from the Church as if the real church is what we are a part of and the organized church is some manmade other to which we do not belong. None of us belong to an exempt group regardless of theology, maturity, or praxis. What is wrong with the world? I am. What is wrong with the Church? I am. No more blaming. No more victims.

Let us move forward with a worldview that is victim free. We do not live as victims or make victims of others from our thinking. We are not restrained, constrained, oppressed, or disabled. We are agents of the King, and of His Kingdom there is no end. Live it. Release it. See the world changed as you go.

To reform a nation, you need to know what makes a nation truly great. Understanding America’s beginnings creates a pathway forward for all nations. From America’s first President, to the birth of capitalism, to the shaping of its institutions, Karla Perry shows the reader what makes nations flourish.

“Karla has important insights into some of the critical issues of our times. She has the ability to articulate them in an interesting and engaging way that is also practical.”
Rick Joyner, Founder and President, MorningStar Ministries

“An enemy is not needed to destroy a great civilization. It can self-destruct by forgetting the ideas that made its language, literature, family, education, politics, economy, laws and judiciary great. Many feel the need to re-form America that no longer knows what is love, marriage, divorce, male and female, family or nation. In this powerful premier, Karla Perry explains what made America great in the first place and how it can again become a blessing to its citizens and a light to the world.”

Dr. Vishal Mangalwadi, Author of The Book That Made Your World