We cannot have truth without revelation. Without revelation all claims to truth are equally valid or invalid human inventions. No one can claim one idea as superior to another because all are equally human and who is to say one human’s thoughts about the world are any better than the next person’s?

We have history and science today because the Bible gives us the foundation for these disciplines to grow in stable ground. The idea that we can measure, catalog, and classify the natural world is a creation of the Bible’s impact on our thinking. If we do not know our history we will make the grave mistake in thinking that we have always thought this way. When we think our thinking common sense, we will not work to preserve this special knowledge in our culture.The Bible is not Jesus. Jesus is the Truth. It is because Truth is a person that truth can be found in the pages of a book about the Person of Truth. The Holy Spirit leads us into all truth. But He will never lead us in something that contradicts what the Bible truly teaches.

What I have written above is a timeless hallmark of Christian thinking. In our post-Christian world ideas are emerging about the Bible that are derived from outside influences. If Paul was writing, he would say “who has bewitched us”?

One of these influences is atheism, specifically the writings of Richard Dawkins, Christopher Hitchens, and Sam Harris. These new atheists champion the idea that the Christian God depicted in the Old Testament is an abominable monster of a God.  These writers borrow from the biblical worldview to judge the God of the Bible. They not only judge Him, but singlehandedly convict Him of their charges. Leaving aside the myriad of responses one can give to atheism, we move on to look at what this philosophy is now doing inside Christianity.

Philosophies outside of the Church seldom stay outside. Francis Schaeffer once wrote, “Tell me what the world is saying today, and I’ll tell you what the church will be saying in seven years.”

Sadly atheistic biblical interpretation is starting to seep into the Church. Some Christians now look at the Old Testament and see a horrific story (not history) that, if true, makes God out to be a monster. These believers cannot reconcile Jesus of the New Testament with God’s recorded actions of the Old Testament. The solution has become to consider the Old Testament as myth and not history, at least in the parts that supposedly gives God a bad name. This is not good theology; this is evidence of Christians being discipled by atheists without knowing the source of their new found worldview.

I remember sitting in my college literature class learning literary criticism theories. One student turned to me and said if this is how to interpret literature then we have to apply this to the Bible too. I firmly and swiftly asserted that the literary theory we were being taught was not a good way to interpret the Bible. She disagreed.

We are learning to think like those who bring outside accusations to the text and thus to God that are not part of our tradition. When we think like this, we are seeing the Bible like atheists instead of like Christians. Yet we have a real relationship with Jesus and we know how to hear the Holy Spirit. We know God to be real and active in our lives. We know Jesus to be real, so we think we have to come up with new biblical interpretations to explain away these so called embarrassing passages that we now see through our cultural conditioning.

One of the difficulties is taking a tolerance influenced secularized interpretation of the word “good” and judging God’s works based on that postmodern concept. We do not dispense with the understanding that God is good. But if the words of the Bible disagree with our concept of “goodness” we find an interpretation that validates our meaning of the word. In so doing, we interpret the Bible based on our culture instead of getting at the real meaning of the text. 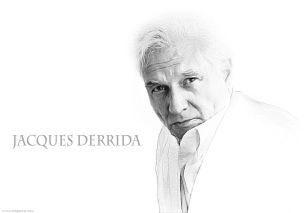 This is postmodernism. This is French literary philosophy applied to the Bible. Jacques Derrida teaches that the author is dead. We bring our own meaning to any book, art, or music, and we determine what it means for us. There is no author to give it meaning, the author doesn’t have a right to infuse it with meaning for the reader. The reader partakes of it from whatever perspective the reader wants to impose upon it. Instead of retaining the integrity of the text and learning what the author is saying, we seek what we receive from our reading of it combined with what we bring to it. In fact, it is believed it is impossible to do otherwise.

In postmodern biblical interpretation, we are not seeking understanding from the text. Instead, we come to it as a corrupted document full of cultural influences taking it away from the purity of God’s inspiration. We approach it as a human work with dead authors that we now get to wrestle with in our day and our interpretation believing that no one can ever get at its integral meaning. To do this is to not only be discipled by atheism, but by postmodernism.

It is ironic in a postmodern age, we are interpreting the Bible to be written by

postmodern story tellers instead of servants of a living God who wrote down his sacred revelation. We err greatly when we use the philosophy of the day, which came from Jacques Derrida, who was born in 1930, to create a revolution in biblical interpretation. Martin Luther led a Reformation because he read the Bible and believed what God said, and now we want to believe modern authors who tell us that mere men wrote the Bible and God didn’t really say and didn’t really do what the Bible says He said and did. That sounds strikingly like a certain serpent.

We serve a living God. The Author of the Bible is very much alive. The meaning He infused in the Bible has not changed from the day it was first penned on papyrus scrolls. Our job is to get at that meaning and to have it inform our theology. We won’t get at that meaning perfectly. We will see in part and not see what we see clearly because we are human. We do, in fact, have cultural influences crowding in on our thinking. But the truth does not change. It is we who have to change to conform to the truth as we grow in understanding of Scripture and as we grow up into Christ.

The existence of an absolute true God and His absolutely true ways, does not give us license to be absolutely certain we absolutely know all God has said and meant perfectly. It means there is Truth outside of ourselves and our interpretations that our thinking is measured against it. The goal is to grow in the truth. To do so we must be willing to give up our ways for His. We don’t size up the Bible, it sizes us up.

Your word is a lamp for my feet,
a light on my path.
I have taken an oath and confirmed it,
that I will follow your righteous laws.
I have suffered much;
preserve my life, Lord, according to your word.
Accept, Lord, the willing praise of my mouth,
and teach me your laws.
Though I constantly take my life in my hands,
I will not forget your law.
The wicked have set a snare for me,
but I have not strayed from your precepts.
Your statutes are my heritage forever;
they are the joy of my heart.
My heart is set on keeping your decrees
to the very end.

One thought on “The Bible in the PostModern World”